If you think big data is one of those meaningless marketing buzzwords, than think again. Regardless of what you call it, the data revolution is transforming our world and as marketers we can’t afford to ignore it.

So what exactly is #bigdata? For starters big data is well… BIG. In 2012 2.7 zettabytes of data was created. That is 500 more times the amount of all data created since 2003 and it’s going to grow 3 times bigger than that by 2015. But where is it all coming from? The answer is US. We are the creators of big data. We are data agents. One of the primary reasons for big data growth is due to the fact that it is continuously being generated from more sources, by more devices, on more platforms.

“A lot of marketers think that they can just collect data and that it will tell them what to do,” says Rospars. “That’s not really how big data works. And what you want isn’t so much big data as smart data.” As marketers we need to understand how to distill all of this data and turn it into smart insights that can be applied to learning about and understanding our audience. 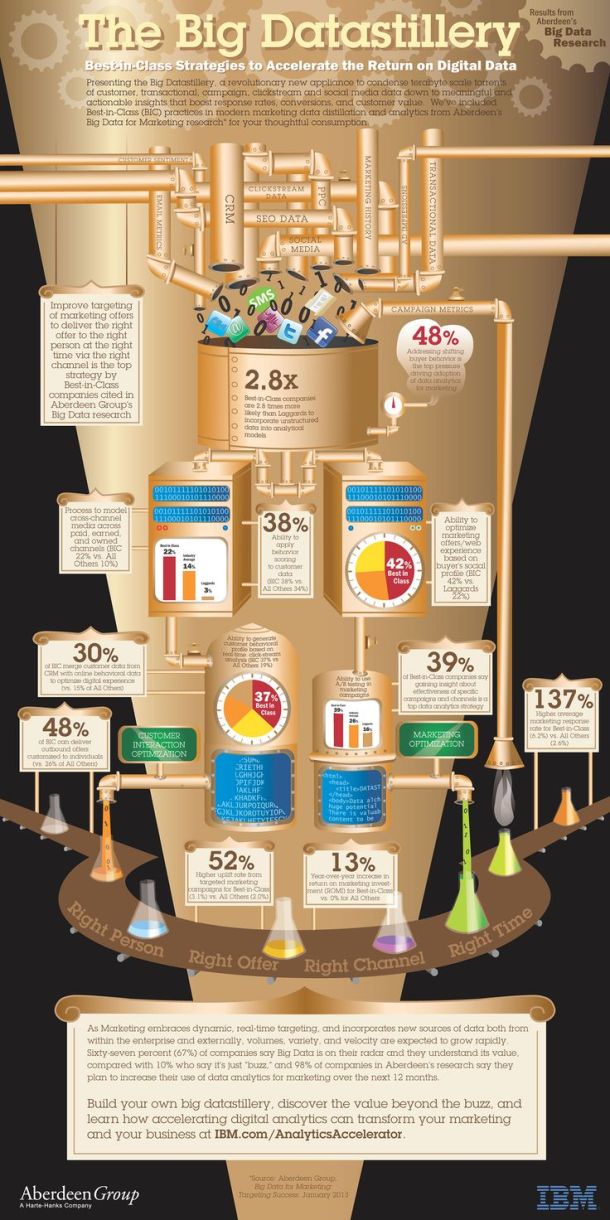 But just how powerful is it? Can we predict the future with big data? “Data is very good at validating past activity or opening up new ideas,” says Dane Atkinson, CEO of SumAll. “But it won’t tell you where to go.” Atkinson says that CMOs fall into one of two camps. Either they think big data will change everything they do, and they buy into the hype without thinking it through, or they know they need big data, but are worried because they don’t understand how to use it and end up fumbling the ball. The answer, according to Atkinson, is actually somewhere between hype and fear. “Big data isn’t the whole wheel, it’s a spoke in the wheel,” he says. As Atkinson suggests these are some general principles to consider: 1. First, says Atkinson, marketers need to adopt a culture that sees information as a key driver of success. “A lot of people point to Netflix as an example of that attitude,” says Atkinson. “They amassed and analyzed all this great data and then used that to create new products that their customers love.” But the key lesson of Netflix is that “Netflix used that data to better understand its customers.” 2. Atkinson’s second piece of advice for marketers – “Make sure you’re using big data to measure the things that are driving your success” – Back to Netflix; They aren’t just successful because they have access to massive amounts of data, but are successful because they use this data to focus on improving elements that drive its success. How much data does Netflix have at its fingertips? According to GigaOm, Netflix looks at 30 million “plays” a day, including when you pause, rewind and fast forward, four million ratings by Netflix subscribers, three million searches, as well as the time of day when shows are watched and on what devices. Netflix, which has 27 million subscribers in the nation and 33 million worldwide, ran the numbers. It already knew that a healthy share had streamed the work of Mr. Fincher, the director of “The Social Network,” from beginning to end. And films featuring Mr. Spacey had always done well, as had the British version of “House of Cards.” With those three circles of interest, Netflix was able to find a Venn diagram intersection that suggested that buying the series would be a very good bet on original programming. Jonathan Friedland, the company’s chief communications officer, said, “Because we have a direct relationship with consumers, we know what people like to watch and that helps us understand how big the interest is going to be for a given show. It gave us some confidence that we could find an audience for a show like ‘House of Cards.’” Netflix is successful because it interprets and applies big data. As Atkinson puts it more generally: “Big data can help you measure sales, for instance, and you can correlate that information to your latest campaign, but that won’t tell you what you need to know,” he says. “Suppose you’ve figured out that it’s new customers that are driving your business. What you really want to look at is the data that’s specific to those new customers.”

Data thinking or creative thinking? Brands need to stand for something that probably can never be reduced to data. As Traction CEO Adam Kleinberg states, “Data doesn’t tell you to hire Betty White. Data doesn’t tell you to invent the Nike Fuel Band“. I couldn’t agree more about the danger of devaluing the qualitative and overusing the quantitative. We need to find the appropriate use of data in our approaches to marketing.

Big data is incredibly important. We should care about it and companies can gain competitive advantages from it, but there are significant limits to big data. As Rospars says, “A lot of brands and agencies see the world as either creative or data, but I think both views miss the larger point,” Rospars says. “We try to say that both are equally important.” “We choose ideas that we are passionate about,” says Rospars. “But we also use the data to help us better understand those insights.”